It is February 6th, 2005, 6:30 a.m. Pacific Time.  It is still dark as we arrive at LAX, weary with the weight of leaving.  We are traveling home with Wes’ Tyler bass marked “Duran Duran stage right…  if found, return to ……………”  John stands like a paternal sentinel over the Tyler.  I take a deep breath and approach the big, coffee-brown skinned sky cap with the shades that don’t mask a guarded, tough, LA look.  I tell him that we are parents.  That our older son, an extraordinary bass player and beautiful human being, died of cancer, and we are traveling home with his bass.  I have not yet formed the words to ask for help, when he says, “You wait right here.”

He goes into triage mode, assigning a young sky cap to the bass itself with special instructions that we don’t understand.  He is handling the suitcases like family treasures.  He is giving order to the disorder of all that will never be in order again.

Some timeless time later, all is done.  He stands before, not me, but Wes’ father, with whom he has so far had not one word.  He hands John the boarding passes and the luggage-stickered envelope.  He takes off his shades to reveal such kind eyes as you have rarely seen, and he says, “The way I see it, God must have needed a really good bass player.”

It is March 7th, 2007.  We arrive at LAX with the fullness of WesFest2 still resounding in our hearts, but, as always, with the emptiness of leaving LA.  We decide to check in inside to see if we can get exit row seats to stretch our legs.  We are lucky.  We get the exit row and send our baggage through x-ray.  John says he wants to stop in at the men’s room before going through security, so I stay with the carry-ons while he goes toward a nearby restroom.

I am standing there thinking about how many times we’ve come and gone through this airport, how it doesn’t get any easier to leave LA, when John comes back into my view with a look that I have known for 40 some years – a look that is part mischief and part knowing and all truth.  John says, “You see that guy, that skycap over there?  I think he’s our “God needs a really good bass player sky cap.”  I look at this coffee-colored man, and I am thinking that John is always on the mark about these observant and deeply intuitive things.  “Shall we speak to him?”  John asks.  About the reaching out and speaking to people, John defers to me.  “Let’s,” I say.

At this point, our God-Needs-A-Bass-Player guy is on his way back out to curbside.  Later, John will tell me that when he was in the men’s room, our God Man walked in, and a guy asked him how he was.  “Better than good.”  Okay, that was the first clue.  The second clue was his voice.  It was the same voice – John was sure of it.

So out to the curb we go.  Another skycap asks us where we are traveling.  I tell him that we have already checked in, but that we would like to speak to “that gentleman,” I say, pointing to our God Man.  Very friendly, he is, and right away, he goes over to our guy and tells him we want to talk to him ’cause he helped us a couple of years ago.

“Hello,” I say.  “You helped us two years ago when our bass-playing son died and we were traveling home with his bass.  You told us that the way you figured it, God must have needed a really good bass player.  We have thought about you every day.  You really helped us.”

“And I have prayed for you every day,” he says, taking his glasses off once again, and showing us in full measure the kindness in his eyes.  “I thought I remembered you when I saw you inside.”

I ask him his name.  “Johnny,” he says, “Johnny Morris.”  Waves of connection warm us as they always do when there is a Wes sighting, and this is surely one.

He tells us again that he prays for us, and in that moment I am memorizing this other-worldly connection to his strength.  When I despair, I am thinking, I will know that Johnny Morris is praying for us, and in that instant I will hear God’s bass player –  in the groove as ever.

We hand him the DVD program of WesFest2.  Johnny Morris tells us that he will cherish it forever.

We will cherish Johnny Morris forever, along with his prayers and the sound of God’s bass section keeping the groove. 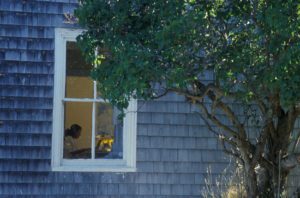